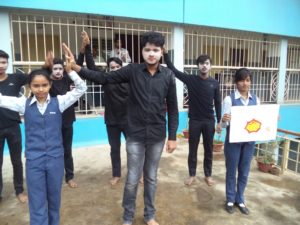 To create awareness among the students about the distastrous effects of growing population, World Population  Day was celebrate at RVS Academy, Dimna, Mango. The morning  assembly began with an impressive story by the school Principal  Mrs. V.Chhaya Das on Population – Explosion which is leading to the depletion of natural resources. A speech was delivered by Gopal Krishna a students of Std XII on the adverse impact of population growth this was followed by a small skit by std X and XII students highlighting the problems of growing population like poverty, illiteracy, malnutrition, unemployment etc under the able guidance of Mrs. Mitali Roy Choudhury the Vice Principal and Mr. Wilson Topno  the music teacher of the school. The programme ended  with National Anthem.